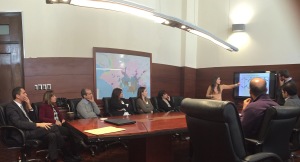 Guadalupe presents the results of the study to the Montevideo financial resources office.

From Risaralda, Colombia to Paraná, Argentina and Ipatinga, Brazil, local governments around Latin America are increasingly turning to strategies that reward good taxpayers as a means to boost tax compliance. But, do these programs work? Can positive incentives help local governments to increase their ability to collect local taxes? These questions are of particular importance for Latin America, where decentralization processes have put many important functions in the hands (and budgets) of local governments, who have limited mechanisms to punish taxpayers for poor tax behavior.

Over the past two years, Thad Dunning (UC Berkeley), Felipe Monestier (Universidad de la República, Uruguay), Fernando Rosenblatt (Universidad Diego Portales, Chile), Rafael Piñeiro (Universidad Católica, Uruguay) and I have partnered with the local government in Montevideo, Uruguay to study individual motivations for tax compliance. The project is centered around a “lottery for good taxpayers,” a policy stretching over a ten year period that the local government put in place to reward taxpayers who have paid their taxes in full and on time. Winners don’t have to pay taxes for a year. 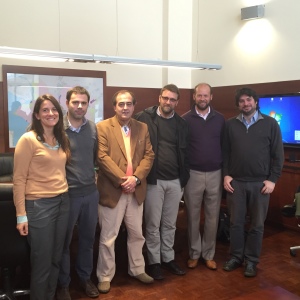 The research team with Mariano Avondet, the legal advisor to the Montevideo financial resources office.

Our research design takes advantage of the fact that the lottery provides a control group to evaluate the effect of the reward on the winners. Since the program has not been widely advertised (our survey indicates that only 8% of Montevideo citizens know about the lottery), we were able to combine the natural experiment with field and survey experiments in order to understand whether information about the existence of the lottery boosts compliance and/or changes citizen attitudes towards the local government.

Our results – which we presented at the Montevideo municipality this week and which will be included in a CPD policy brief (forthcoming) – suggest that winning the tax holiday has a negative effect on compliance. Moreover, a simple message informing citizens about the existence of the lottery does not increase the proportion of individuals paying taxes. However, we find that the way that rewards are allocated does, in fact, matter: informing citizens that rewards are distributed using a public lottery (instead of in a discretionary manner) reduces the perception that the government always rewards the same people and increases citizens’ belief that paying local taxes is beneficial.

How Do Citizens in “Unauthorized” Urban Slums, Which Lack Legal Sanction, Access Basic Services From the City? Discussions With a Self-help Group in Cuttack, India
By: Anustubh Agnihotri, CPD Research Associate (UC Berkeley)

My preliminary fieldwork in India this summer focused on understanding how citizens living in low-income communities access basic public services from the urban local government. Urbanization accompanied by a lack of planned development has led to proliferation of low-income settlements in Indian cities. Low-income settlements squatting on government land are classified as “unauthorized” slums by the state. Over time some of these settlements are recognized by the state, given land title, and categorized as “authorized” slums. 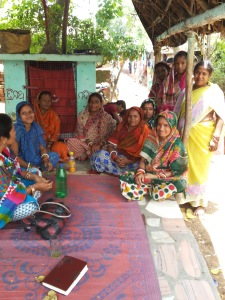 Members of the self-help group in Deoband Nagar settlement in the city of Cuttack, India

How do citizens in “unauthorized” urban slums, which lack legal sanction, access basic services from the city? How do citizens in these settlements navigate the political and bureaucratic landscape to claim benefits related to government poverty alleviation schemes? To get a better sense of the challenges faced by citizens in these settlements, I held a discussion with the self-help group in Deoband Nagar settlement in the city of Cuttack – a 25-year-old unauthorized colony that has close to 70 households.

The group discussion was facilitated by Geeta ji from the Center for Advocacy and Research. Geeta ji has been working with the community for more than 15 years and knows the majority of the households. As we entered the Deoband Nagar, she recounted that when she first came to the settlement the residents chased her away, since they were suspicious of outsiders. Slowly Geeta ji was able to establish trust with the community and has since helped the community get access to tube wells, apply for government welfare programs, and has been instrumental in the formation of the women’s self-help group. 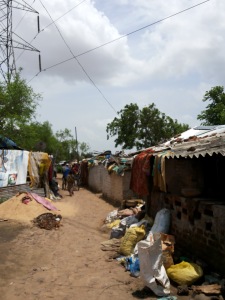 The discussion with the women’s self-help group covered a wide range of topics. Access to sanitation was severely inadequate, with less than 10% of households having access to a toilet. Piped water supply was not available and all of the households relied on the tube wells for their water. Some households had managed to get an electricity connection, but the electricity department had asked some residents to furnish land titles to sanction an electricity connection. The lack of political support was a crucial factor in explaining the dismal condition of public service provision. The members of the community had received little support from their local political representative in this regard. When they approached the local representatives they were made to wait for a long time and redirected towards bureaucratic functionaries at the municipal corporation of Cuttack.

Apart from public good provision for the community, government poverty schemes in India target individual households living below the poverty line. However, in Deoband Nagar only 15 to 20% of households were classified as living below the poverty line, based on a survey conducted more than 10 years ago; the new migrants who had moved in within the last 10 years had not been counted. Some households had access to old age pension from the state, but many eligible households had been left out. Almost all the households, however, had the unique biometric identification card (Aadhar Card) and had opened a zero payment balance in the bank linked to this identification.

I came out of the discussion with a sense that both bureaucratic procedure and political patronage worked together in explaining the variation in access to government services in urban settlements. Bureaucratic rules were often selectively invoked and eased when the community or the household either had political support or the ability to pay bribes. Anecdotes from one location are hardly generalizable, but my interaction with the self-help group helped me gain a deeper understanding of the challenges facing citizens in urban areas. 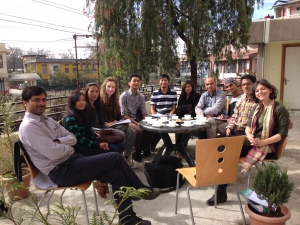 Nikhar Gaikwad and Rachel Brulé with their research team in India

Over the past two years, I have been working with Rachel Brulé (NYU Abu Dhabi) on a survey project entitled, “Do Cultural Norms Explain the Gender Gap in Political Economy Preferences? Evidence from Matrilineal and Patrilineal Tribes in India.” The project utilizes a new setting and approach to shed light on an enduring puzzle regarding the role of gender in politics: Why is it that across societies, women and men exhibit different policy preferences and modes of political engagement? For example, women are more likely than men to favor the welfare state, yet less likely than men to participate in the political arena. What explains these differences?

Capturing the origins of the political gender gap is fraught with methodological difficulties because the determinants typically evoked by scholars—biology, culture, economic resources, and social power—are closely intertwined in most real world settings. Cultural traditions that transmit wealth from father to son, for example, systematically exclude women from ancestral sources of inheritance, influencing women’s social power, intra-household bargaining, and investment opportunities. Likewise, women’s observed economic attainments might be misleading predictors of their preferences over policy because opportunities for future economic advancement, such as education or employment, are often limited in patriarchal settings. 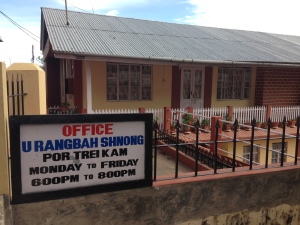 Brulé and I attempt to surmount these methodological challenges by conducting a survey that leverages the unique cultural setting of Meghalaya, in northeast India, where the world’s few remaining matrilineal tribal communities live in close proximity to patrilineal communities. In matrilineal societies, cultural traditions specify that ancestral property and family titles transfer from mother to daughter, grooms relocate to the brides’ family homes following marriage, and women make important economic decisions. The distinctive feature of matrilineal cultures is that they secure women’s economic prospects both in society and in the household.

By exploiting variation in cultural norms related to women’s economic prospects—both within and across neighboring matrilineal and patrilineal societies—we are able to better isolate the effect of cultural traditions and material resources on individual preferences and political behavior.

Revista de Ciencia Política invites scholars to take part in a special issue on research transparency in the social sciences and specifically in political science. This special issue seeks to bring debates about boosting transparency, which has received prominent attention especially among scholars using experimental methods, closer to the study of Latin American politics. Additionally, it aims to foster methodological debate about the virtues and challenges of study pre-registration, results-blind review, and other means of limiting publication biases in the social sciences. Finally, it aims to highlight substantive research that uses these methods to bolster the transparency and credibility of research results. Learn more about this special issue and the details for submitting a proposal here!

Center on the Politics of Development

In a recent article published under the Governance Research Stream on the Social Science Matrix website, Ryan Whitacre highlights the CPD and the work we do to advance mixed-methods research on development, envision public policy solutions, and advocate for sustainable changes to the governance of developing communities.

NEW YORK, NY – Today, Evidence in Governance and Politics Network (EGAP) Metaketa announces the awarding of three additional grants to innovative experimental research projects that seek to assess the role of information in fostering political accountability in developing countries. Four initial awards were given onAugust 6 (see here), totalling seven projects participating in this round. Metaketa, which is administered by UC Berkeley’s Center on the Politics of Development, is aimed at maximizing comparability and cumulation of learning across studies. In turn, EGAP will disseminate findings to the broader academic and development policymaking communities.

The awards range from $150,000 to $350,000 in EGAP funding. Some of the projects will begin in early 2015, others later, and all will be completed by Fall 2017. Winning projects will collaborate closely, in conjunction with the EGAP Metaketa Selection Committee, with the goal of maximizing the consistency of designs, interventions, and outcome measurement across studies. The following are the most recently awarded projects: 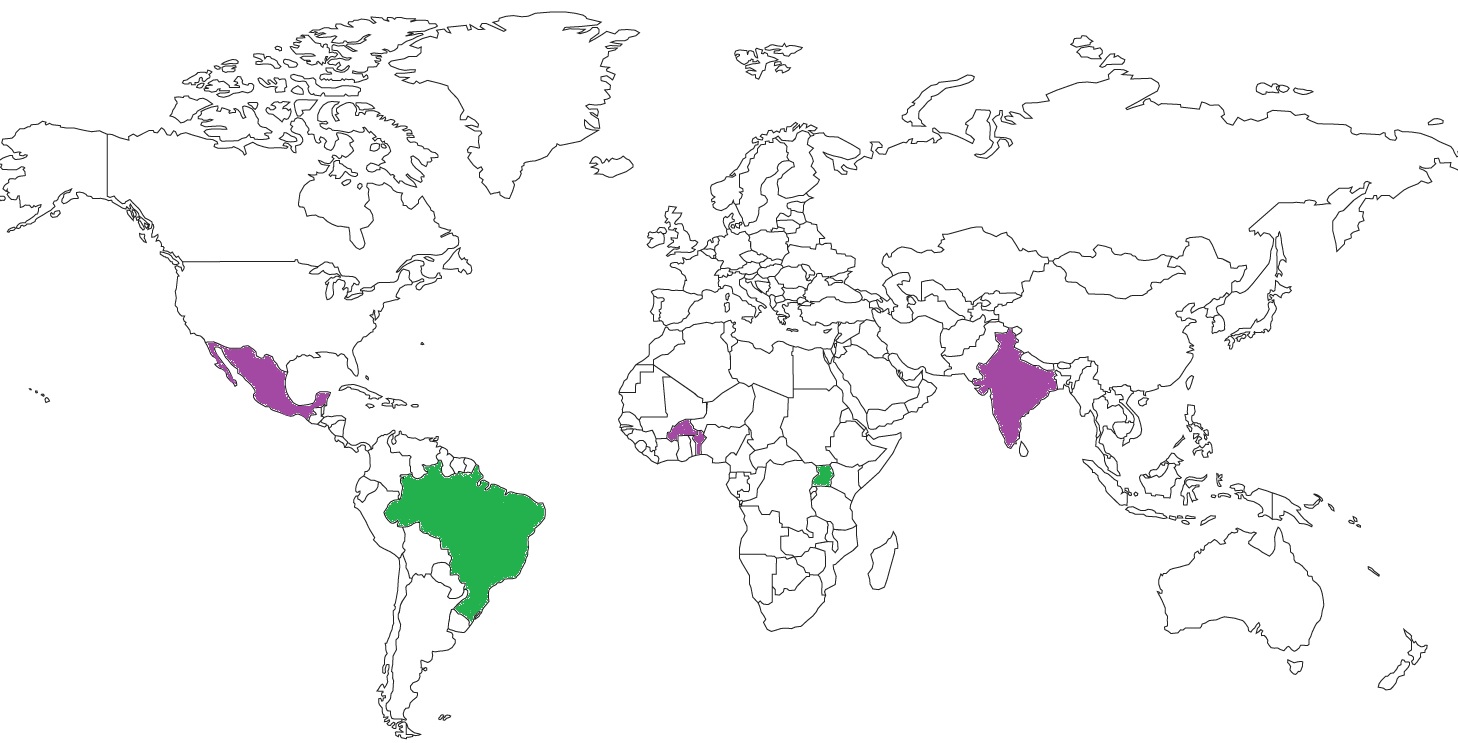 Today, Evidence in Governance and Politics Network (EGAP) Metaketa announces the awarding of grants to innovative experimental research projects that seek to assess the role of information in fostering political accountability in developing countries.  Four projects are included among the grantees, while three other projects are under revision; the full slate of winners will be announced in October 2014. Metaketa, which is administered by UC Berkeley’s Center on the Politics of Development, is aimed at maximizing comparability and cumulation of learning across studies. In turn, EGAP will disseminate findings to the broader academic and development policymaking communities.

The awards range from $175,000 to $300,000 in EGAP funding; one project is fully funded from another source. Some of the projects will begin in August 2014, others later, and all will be completed by Spring 2017.  Winning projects will collaborate closely, in conjunction with the EGAP Metaketa Selection Committee, with the goal of maximizing the consistency of designs, interventions, and outcome measurement across studies.

Replicate it! A proposal to improve the study of political accountability